The Internet of Things offers new opportunities to Swedish industry. One step towards success is to become more transparent as a company and exchange ideas with others. One such example is the joint venture Combient, which visited Elmia Subcontractor and took part on stage under the theme “The IoT is creating opportunities for new products and business deals”.

“In a situation where we are facing new technologies and where there is a great need for innovation, comparing experiences is a necessity. Sweden has a fairly strong industry with many international industrial companies who have similar challenges. Comparing experiences about all this is extremely important,” says Patrik Tillman, Senior Relationship Manager at Combient.

Combient was founded in 2015 and is a venture by 21 Swedish and Finnish companies from widely differing sectors. Its owners include Atlas Copco, Electrolux and SEB. Subsequently companies such as Husqvarna, Södra and Kone have become members. The vision is that Swedish and Finnish industry will become number one in a world of digital innovation.
“As well as comparing experiences, we also want to attract talents to industrial companies,” Tillman explains. “Finding digital talent has been very difficult in the past. As a smaller player, we may be able to show that a lot of interesting stuff is actually going on, and that it is possible to work with various industrial companies, not just one.
“The third issue is the importance of experimenting and getting up speed.”

How important is it for Swedish suppliers to keep up with technological advances?
“I believe that the transition is very overwhelming, particularly for a small-scale supplier. The response tends to be: ‘Help – what amount of resources should I invest in this?’ At the same time, I don’t believe there is any alternative. Either you continue trying to find your own solutions or you open up so that your customers can do it for you. Otherwise you become irrelevant. I believe it’s a very poor strategy to say: ‘Actually we won’t do anything.’”

High pressure and positive outlook in the manufacturing industry 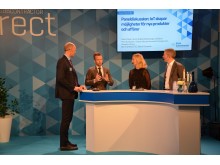