A number of discussions on stage at the fair focused on the opportunities and challenges faced by the manufacturing industry due to connected technology. In the midst of an economic boom a paradigm shift is occurring whereby the industry as a whole must relate to the rapid pace of development.

“Our welfare is based on industry and we must continue to be an industrial nation,” said Magnus Melander, Internet of Things expert and founder of the startup alliance Swedish M2M Services Enablers (SMSE), during one of the many stage debates. “We have good conditions and I want us to now take this the whole way and not just be users of the new technology while other people build up its industry. We must seize it and keep it here.”

As a reaction to the exponential rate of development faced by the industry, a range of new events was launched on the trade fair floor. The new inspiration arena Subcontractor IoT Arena combined with a new exhibitor segment and Wednesday’s IoT theme to be a success and attracted many people to see practical examples of how the IoT is making processes more efficient and creating added value and new business models, and to meet suppliers who will create the solutions.

Also new this year at Elmia Subcontractor was Pop-up Expo, a mini-exhibition with a different theme every day. On the first day the theme was technology-driven companies, with a premiere for Subcontractor Jumpstart in cooperation with Teknikföretagen (the Association of Swedish Engineering Industries), at which competing startups had a minute each to pitch their business models to the jury.

“The mood is positive and there is strong energy on the trade fair floor,” said Peter Anderson of Eurimex AB, an exhibitor at the fair. “As an exhibitor we can see that with its various new ventures Elmia is working to attract the right visitors.”

Wind in the industry’s sails

The manufacturing industry’s role as an engine for the economy of Sweden Inc. was also noticeable when Sweden’s Minister for Enterprise and InnovationMikael Damberg and the leader of the Swedish Centre Party Annie Lööf were questioned on stage at Subcontractor Direct.

“We’ve had a huge number of good visitors and even before the last day we had almost 400 leads,” said Lasse Bengtsson, marketing manager for Sweden, Norway and Denmark at SSAB Europe.

The favourable climate for the industry and all its suppliers was confirmed by positive figures presented during the fair by Teknikföretagen, the Scandinavian AutomotiveSupplier Association (FKG) and Swedish Industry Association (Sinf).

“2017 will be a good year for the suppliers,” said Fredrik Sidahl, CEO of FKG. “At the same time it’s important to be active and lay the foundation for future business, to keep up to date with technology and to work closely with our customers. The issues that were discussed and the contacts that were made here at Elmia Subcontractor are incredibly valuable for the entire manufacturing industry.”

In pace with the times

Elmia Subcontractor’s motto is “business unusual” to emphasise that it is a survival issue to respond to megatrends and to keep updated with tomorrow’s technology on a broad front. At the same time, it is important not to forget that each individual company is the place where development happens.

“We’ve introduced a range of new ventures this year to reflect the high pace of development and indicate the opportunities,” said Karla Eklund, fair manager of Elmia Subcontractor. “Sweden has incredibly driven entrepreneurs with cutting-edge expertise. The fair has really shown that this year through the companies that have exhibited and participated in our events.” 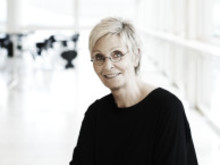 The superheroes of steel. That has been a focus for SSAB during this year’s Elmia Subcontractor. The company’s presence at the fair has also been a great success with almost 400 leads in the first three days alone.

No rot and no need to repaint. Interest in wood-plastic composites is growing and the Swedish company A-Plast has developed a material all of its own. At Elmia Subcontractor visitors have asked many questions about the technology involved.

SKF is launching a series of new products on the Swedish market at Elmia Subcontractor 2017. The focus is on efficient rotation and increased operational safety.

Perseverance pays off. The Italian company Ma. Bo. is exhibiting this year at Elmia for the fifth time and sales manager Pierluigi Casadei has seen strong growth for the company. “It gets better and better every year,” he says.

Better design possibilities and greater efficiency – using a light guide plate equipped with LEDs has many advantages. The Danish company Ingemann Components is presenting the possibilities and the solution at Elmia Subcontractor.

The Internet of Things offers new opportunities to Swedish industry. One step towards success is to become more transparent as a company and exchange ideas with others. One such example is the joint venture Combient, which visited Elmia Subcontractor and took part on stage under the theme “The IoT is creating opportunities for new products and business deals”. 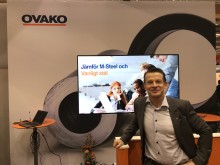 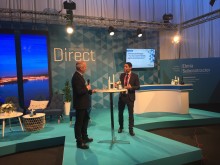 Dare to keep up with the pace of development

Start by creating an awareness in your company about new technology. Then dare to try out your ideas. That advice was given by Benny Guttman at Elmia Subcontractor and it focuses on the technological shift we are currently experiencing.

It is obvious that the Internet of Things can create new business applications for the manufacturing industry. But the IoT can also help the world’s climate. The Swedish company WSI has developed an environmental sensor that collects weather data from 30 cities around the world. The solution can be seen at Elmia Subcontractor. 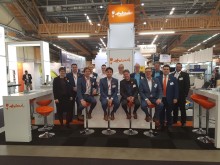 Sensors on rubbish containers can help a recycling company make major energy savings. The solution was developed by the Finnish success company Enevo with help from Arrow Electronic. At Elmia Subcontractor Arrow is showing how the system functions in real life. 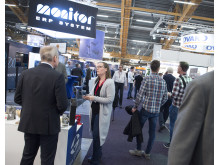 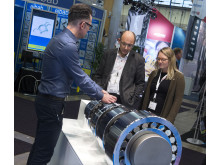 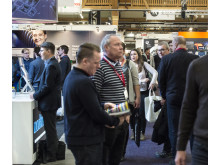 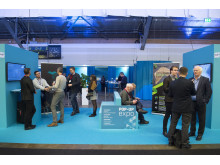 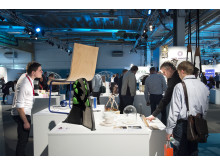 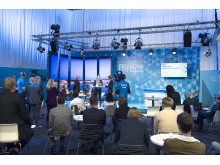 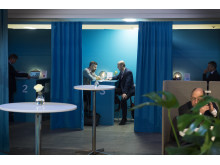