A Japanese tripod ladder that is specially designed for the garden industry has won the 2018 Elmia Garden Award for the year’s best garden product. The tripod ladder is both stable and durable and attracted great interest when it was first presented to the Swedish market.

“I believe the award will make the ladder even better known,” comments Lasse Pahlberg, CEO of ARS – Nakaya Scandinavia AB, the general distributor for the Japanese company Hasegawa, which is the world-leading manufacturer of the tripod ladder. “It is a small, unusual product that makes an immediate impression. The news about it that has spread via social media and blogs so far has created great interest. It is wonderful that it won – it’s a product that really serves the industry and it is really worth all the attention.”

“Many people who have experience with ladders are impressed by this tripod ladder’s stability,” he continues. “It is much safer than a builder’s ladder. The ladder is fully welded in aluminium so it is both lightweight and durable and has very high quality.”

The tripod ladder’s front legs are telescopic and can be extended and adjusted depending on the ground conditions, so it can be adapted to a slope. The ladder is easy to move around and place so that you get close to trees and hedges without having to lean the ladder against them. Each step of the ladder has double rungs and the angle of the steps can be adjusted so the ladder resembles an ordinary staircase. This makes it easy for gardeners to hold their tools in their hands.

The tripod ladder has been made for more than 50 years in Japan, so it is an old product that has been developed over the years, but it has not previously existed in Sweden. ARS – Nakaya Scandinavia AB began importing it first as a secret trial but the photos were immediately spread on social media and led to greater demand, including from arborist companies and training centres in the garden industry. In the summer of 2017 the distributor began importing the product on a larger scale.

The tripod ladder is available in Sweden in four lengths, which are EU approved for professional use. The ladder was presented to the Swedish and Nordic market for the first time at Elmia Park and Elmia Garden 2017.

“It feels great that the premier was at Elmia,” Lasse Pahlberg concludes. “I have not previously seen any ladders that focus on the garden industry – this is something totally new. And it’s very clear that the ladder meets a need of the industry.”

“This Japanese tripod ladder, which with its slim upper section makes it easier to do tasks like pruning the tops of old and large fruit trees, is a good addition to the Swedish market,” comments Christina Säll, jury chair of the Elmia Garden Award. “The broad lower section means the ladder can stand sturdily, something that is important when working from ladders. The fact that it is also easy to handle and carry means that it will be used.”

The Elmia Garden Award jury consists of Christina Säll, editor-in-chief of the magazine Hemträdgården, Simon Irvine, garden designer at Läckö Castle, and Magnus Åström, creative director at Blink. This year’s shortlisted products were presented for the first time at the Elmia Garden fair in 2017.

Elmia Garden Trends is the inspirational website that gives the garden industry a preview of the coming year’s trends. The website functions as a business tool that offers inspiration and purchasing support. Now the trends will also be presented to the general public at Liseberg’s Garden Days from 17-20 May. 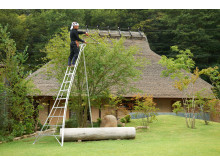 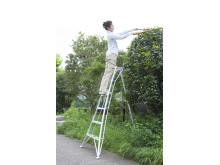 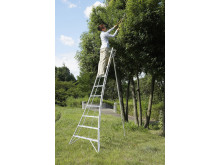