A whole hall dedicated to the history of trucks. That’s what veteran truck devotee Anders Andersson and his friends could present at Elmia Lastbil. The space was packed with trucks from bygone times. “All in all we exhibited 53 vehicles – the most we’ve had since we started here in 2010,” he said.

The veteran trucks were located in Hall C. Andersson, who was there in a non-profit capacity, welcomed many visitors.
“The exhibition has attracted a lot of attention,” he said. “By Wednesday afternoon it was already packed with people. There were a lot of spontaneous reactions. People think it’s great fun to come in here, which of course is terrific for all of us who are involved in this project. We were also thrilled to present the veteran trucks at the fair’s official opening – that just proves there’s a lot of interest in them.”

The purpose of the veteran truck hall was to exhibit trucks from various decades but there was also an underlying and perhaps even more important motive:
“We want to stress that society would not be where it is today in terms of supply and development if we had not had goods transportation by road,” Andersson explained.
“It began with the sea and then the railway. Back then, traffic could only go between specific points. Neither the water nor the railway reached everywhere. And the roads were bad. There was no real road network in Sweden until the 1970s.”

Gradually the haulage industry became more and more important. Today its benefit to society is undeniable. In the veteran truck hall this importance is symbolised by a refuse lorry. If refuse collection ceases for only a few days nowadays, the results are quickly dramatic.
“The idea is to make visitors think a bit and see how everything is connected. Then they go into the other sections of the fair where the new products are standing. That way they realise the historic link,” Andersson explained.

The exhibition included examples from the origins of trucks up to the later part of the previous century. The oldest vehicle was a Scania-Vabis from 1913.
“The Royal Swedish Post and Telecom Authority, as it was called back then, ordered 12 of them. It’s built on a car chassis but has always been used as a goods vehicle,” Andersson said, adding that the more than a century old truck was also there to celebrate Scania’s 125th anniversary. Scania’s heavyweight models were also showcased, including one mighty truck from 1991 standing in the centre of the hall.

Other marques were of course also represented, such as Tidaholm, Volvo, International and Fargo. The veteran truck hall was truly a gem. 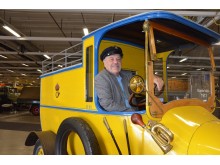